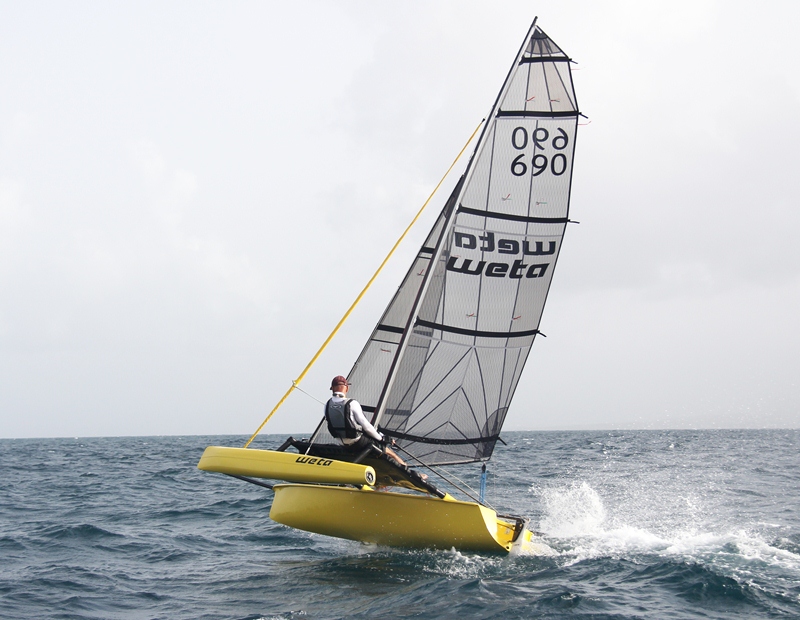 The Weta is a delightful boat but a wet one  http://www.wetamarine.com/news-and-events/video-weta-blasting-2up-in-17-25-knots/   No problem in Florida or Aukland perhaps, but more so in Scotland in winter - particularly if you have a less mobile crewmember sitting low down on the centreline. There are even videos in existence of an Australian boat sporting a ‘Bikini’ http://www.youtube.com/watch?v=r_xL5hWMM5o . They are extremely effective at stopping the spray but there are disadvantages: they restrict access to the mast when hoisting the sail and restrict access to the front beam when boarding and when coming ashore.  They also tend to flap around like a demented fruit bat which detracts from the aesthetics of the boat.  The answer turned out to be elastic - lots of it…..

The Weta is a small trimaran suitable for racing, recreational sailing and training by one to three people.  It weighs quite a bit more than a Phantom and is the same length as a 29er. It is thus quite a small boat, although its tall rig gives it ‘presence’ on the water. It feels bigger. However, when making performance comparisons, particularly with the larger catamarans, it must 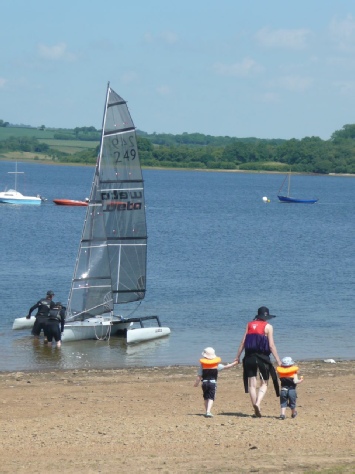 be remembered that it is a 14 footer,  not a 16 or 18 footer. A NACRA 17 it is not. It has no direct equivalent. It is, for instance, a much faster and more sophisticated boat than the Challenger and a much more conventional boat than the foot-steered Waverider, both of which are sailed facing forwards from a kayak-like position in the main hull.  Although it has more than one hull, it has sailing characteristics typical of a conventional high-ish performance monohull dinghy and can be thought of more as ‘a Moth with stabilisers’ than a catamaran. Unlike (say) an ORMA trimaran, the Weta does not ‘fly’ the main hull - the leeward float will submerge before the central hull will lift out of the water. In famous trimaran terms think of B & Q rather than Banque Populaire, BMW/Oracle or the MOD 70. While the boat can capsize in extreme circumstances, it does not normally balance on edge like a catamaran.  The deep daggerboard and jib facilitate quick tacking. A self tacking jib is available on new boats and for retrofit on older ones (pre 2015).   On its very light launching trolley the boat can easily be launched and recovered by one person. Sailed singlehanded the boat is lively and responsive. It is at its best in 12 - 20kts of wind when it can be driven rapidly to windward with the helmsman sitting comfortably on the edge of the trampoline or hiking from toestraps while sitting on the windward float. At the windward mark the reacher or gennaker is unfurled in the manner of a GC32 or the M32 used in the World Match Racing Tour and the boat is tacked (gybed) downwind with the apparent wind more or less on the beam. Gybing is completely innocuous  - there is no crash as the boomless mainsail comes across, there is no tendency to heel and the helm remains neutral so there is no tendency to gripe or broach.  The fine bow of the main hull can be buried on a tight spinnaker reach but bearing away onto a run completely de-powers the rig.  Boatspeeds of 19 knots have been measured when ‘heated up’ although 13kts would be more usual. Two up, the boat feels much steadier - more like a small yacht. There is comfortable room for two plus, in light winds, an additional child or two.

Though marketed as a manufacturer’s one-design, the boat has had a number of significant modifications since its launch some eleven years ago.  There have been three rudders - a lifting rudder in a cassette, the Dotan automatically lifting and lowering rudder and the deeper and more sophisticated ‘spitfire wing’ spring strut operated rudder. There is a new deeper daggerboard with a sophisticated section. Sails have changed from white to transparent Mylar. The Harken gennaker furling drum has been replaced with a new Harken or Ronstan continuous line furler   similar to those used on the AC45s.  The gennaker sheets now pass through load-sensitive Ronstan ratchet blocks and there have been minor modifications to the forestay tack fitting.  A furling jib is an option as is a small training or heavy weather mainsail and an oversize square-top mainsail is also available. An even larger  ‘Monster Main’ can be imported from Australia. An  oversize gennaker is available although it has not been seen much lately. There is a ‘resort’ version of the boat which has Dacron sails.  The boat was originally moulded and assembled in China but a change of manufacturer took place in 2015 which brought in  some structural modifications to the floats and foredeck. The boat is now made in Indonesia by a firm headquartered in Singapore. 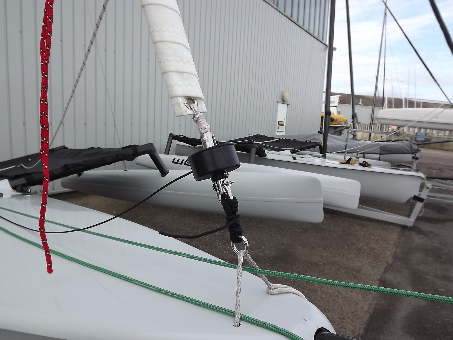 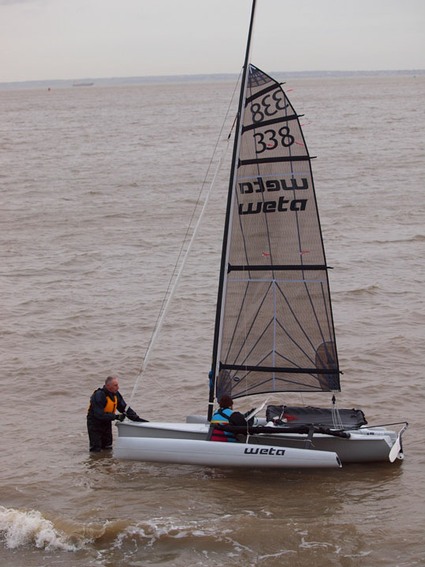 Storage. Much rigging time can be saved if the boat is stored fully assembled with the mast up. In this illustration the boat is left as shown for ten months of the year in the north of Scotland with the sails and dagger board in the boat. The rudder is permanently mounted and there is no cover. Time to being on the water - less than ten minutes

Americans and, to a lesser extent, New Zealanders tend to use Polynesian terminology to describe the different   parts of the boat.  The floats are referred to as amas, the main hull as the vaka and the cross beams as akas. 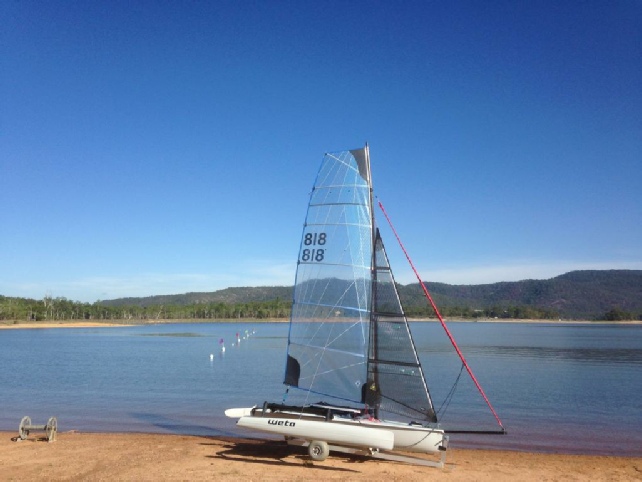 The ‘Monster Main’ currently under development by LR sails of Brisbane is designed to give more performance in light winds and a bit more grunt when carrying two people. Not class legal for one design racing but might be an asset in a handicap fleet.

The Weta is a delightful boat but a wet one  http://www.wetamarine.com/news-and-events/video-weta-blasting-2up-in-17-25-knots/   No problem in Florida or Auckland perhaps, but more so in Scotland in winter - particularly if you have a less mobile crewmember sitting low down on the centreline. There are even videos in existence of an Australian boat sporting a ‘Bikini’ http://www.youtube.com/watch?v=r_xL5hWMM5o . They are extremely effective at stopping the spray but there are disadvantages: they restrict access to the mast when hoisting the sail and restrict access to the front beam when boarding and when coming ashore.  They also tend to flap around like a demented fruit bat which detracts from the aesthetics of the boat.  The answer is bungee elastic - which keeps them taut when in use but allows them to reef when  coming ashore

By using long runs of elastic to tension the spray sheet the whole assembly is kept taught. When access to the mast is required to hoist the sail for instance the elastic can be lifted over the cleat (screwed into the frame) and the sheet will self reef. 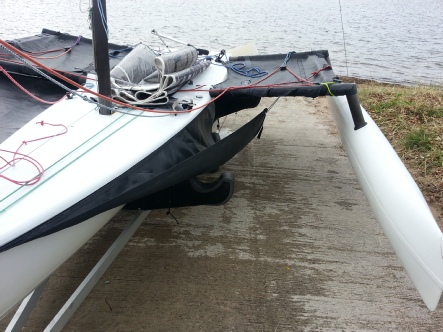 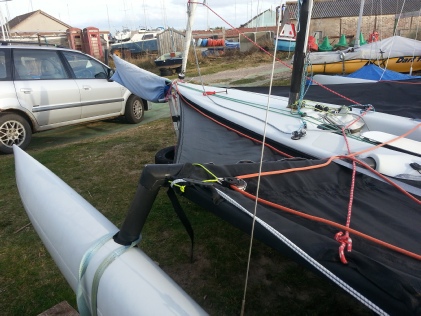 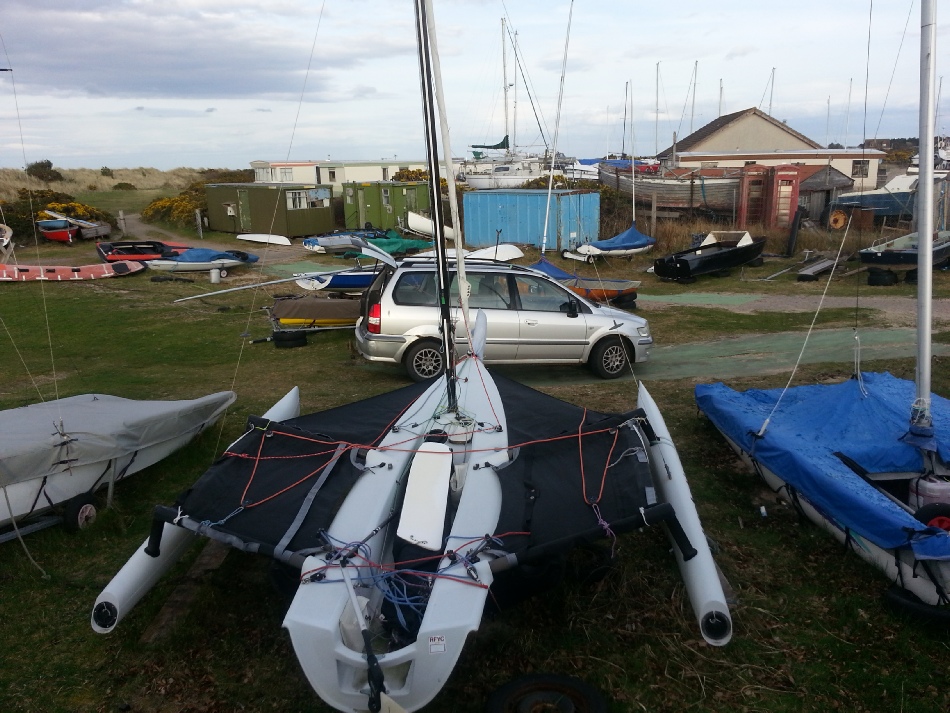 The Dutch boat below, seen on the West Coast of Scotland, has splashguards, a square-top main and is rigged to take a Genoa or Code Zero 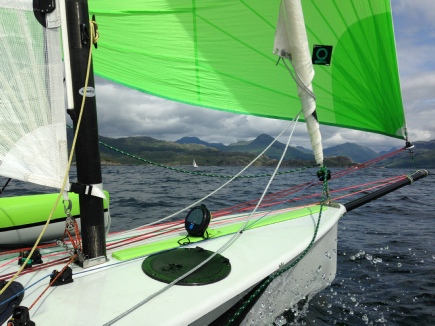 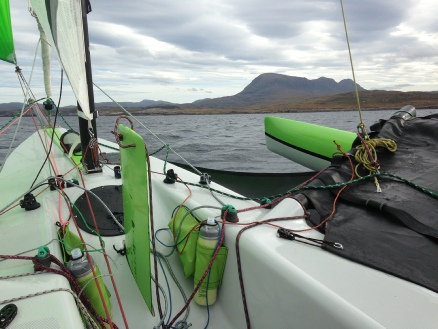 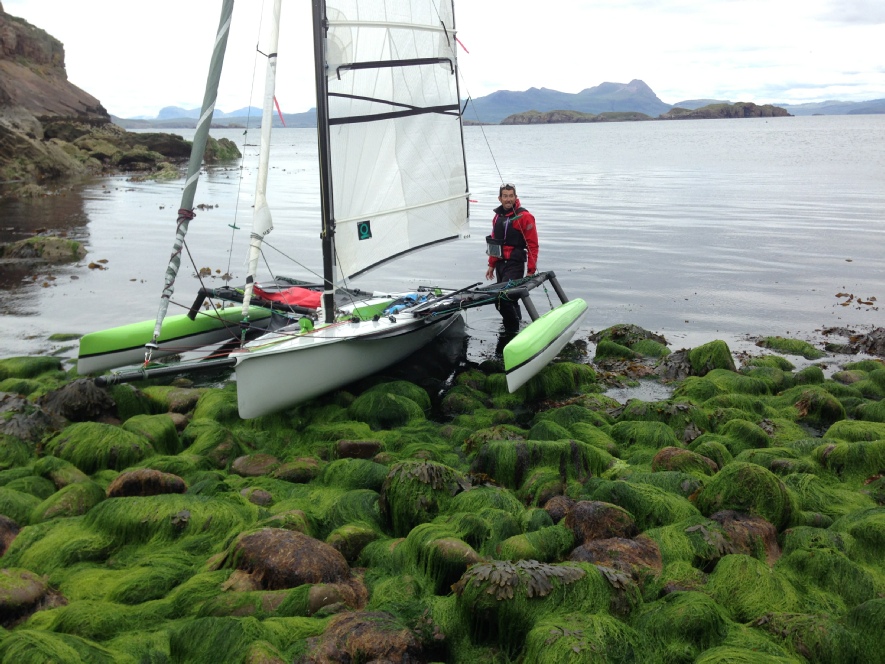 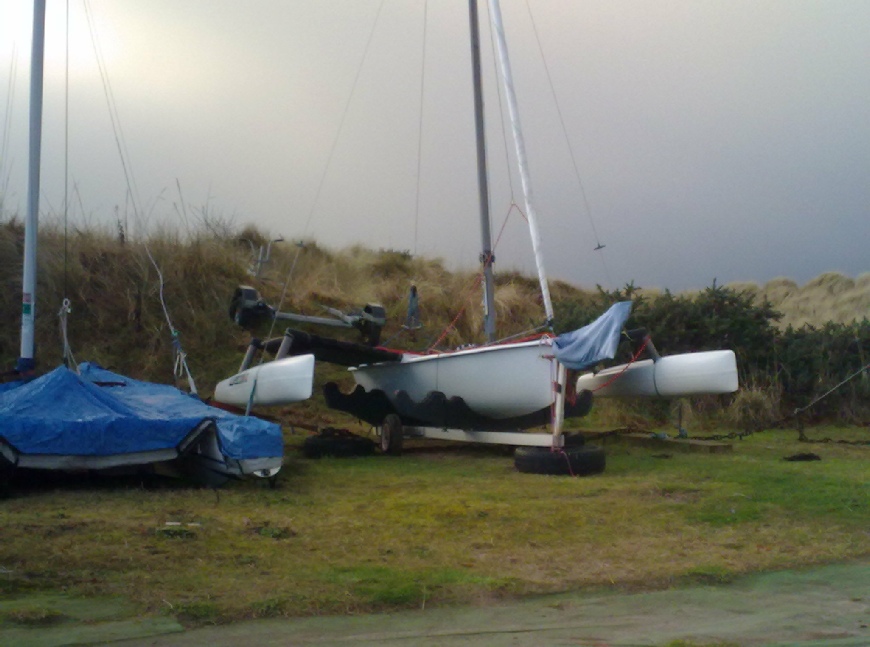 Tie down strap to ground anchor